“Look to Bhagavad Gita as Inspiration in our War Against Ego” 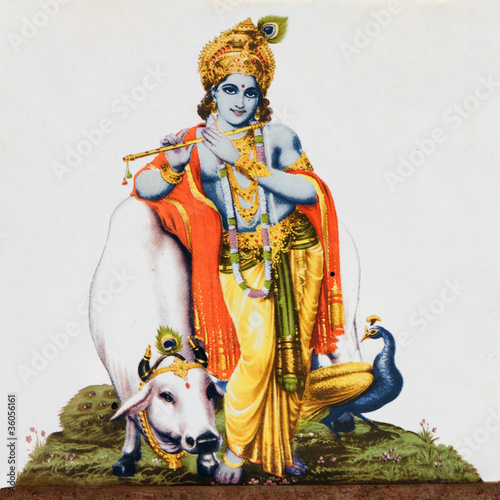 It is no longer a secret that western society is degenerating right before our very eyes. It appears that our bad collective karma (born from the seeds of unjust and immoral actions) has come home to roost. The Western world’s longstanding crusade to plunder the Earth through its predatory commercial schemes has set off a series of moral crisis’ that humanity has rarely seen. One could point their finger at the catastrophic onset of climate change, our feeble response to the COVID-19 crises, the rampant militarization of the globe, the collapse of our financial system, the shocking frequency of mass violent events and the worsening opioid drug epidemic to demonstrate our society’s troubled path. The signs of such an impending breakdown are becoming more obvious to us all. However, less obvious are the root causes and hopeful solutions for it.

More now than at any other juncture in recent history, the one thing that defines western culture is it’s glaring absence of spirit, love and wisdom. Put another way, Western civilization’s guiding ethos appears to be that of ego, division and ignorance. Bred by this society to all become complacent and narcissistic; the illusionary ideologies of consumerism and nihilism have been emphasized as natural expressions of our nature. Sadly, positive end goals for our species like universal humanitarianism, ecological unity and world peace are deemed impossible to attain. If we listen to our politicians and media talking heads speak, it can be tempting to give into the negativity that pervades the world today. However, If we all do as counterculture icon, Timothy Leary suggested we do a half-century ago when he famously said “turn on, tune in, drop out”, we might ignore all the negativity and intuitively recognize that  we, as one human family, are participants in a metaphysical  war of light and dark forces. The essence of those forces are spirit and ego.

Typically, when we hear the word “war”, we may think of a conquering army, innocent people killed or the awful images of physically and emotionally broken veterans returning home from battle. However, in metaphysical reality, the meaning of war deepens. Metaphysically speaking, one could interpret all worldly phenomenon as manifestations from the spiritual plane.  It is true that all attempts to interpret reality are decidedly personal and subjective. However, an argument could be made that we are all just actors in an incomprehensibly cosmic screen play (what Hindus call Lila). This belief, as many followers of Eastern religions espouse, points to a world where we have all been divinely assigned unique roles (in physical form) in accordance with our karma. We assume these roles in a way that reflects the present interaction of all contending forces in the Universe and their quest to achieve balance.

Of course, according to this same eastern worldview, no dueling forces in the cosmos are actually in any real conflict. Light and dark forces, good and evil energies as well as ego and spirit ONLY APPEAR to be in direct conflict to us from where we are standing. In our culture of “black and white” duality, we tend to dismiss the interconnected nature of seeming opposites. In reality, dark is needed to bring light; evil must be realized to know the meaning of good; one must first be ignorant to be wise and all of us must transcend the vanity of ego before we can taste the sparkling springs of living spirit. In a metaphysical sense, then, “war” is not strictly a conflict of polar forces that takes place outside ourselves. Rather, war is also a contest between the prevailing forces of nature WIITHIN ourselves as well. This “inner war” is akin to the kind described in the epoch Hindu text: The Bhagavad Gita. In that sacred book, the great warrior Arjuna, is encouraged to fight a spiritual “war within” by Krishna, his charioteer, guru and God incarnate in disguise. To be sure, the setting of the Gita takes place on an actual physical battlefield, but it becomes clear that the real theme of this story is the war within oneself.

In the Bhagavad Gita, Krishna, the divine being of wisdom and compassion, instructs his faithful disciple Arjuna on how to achieve self-realization. From the onset of this incredibly beautiful and moving scripture, it is clear that Krishna equates the pursuit of self-realization with the surrender of one’s own ego before that spirit behind the forces of nature. Of course, Krishna represents one unique and perfect manifestation of that spirit in form. It is fitting, that Krishna encourages Arjuna to give up all selfish craving and focus his devotion on him:

“All those who take refuge in me, whatever their birth, race, sex, or caste, will attain the same goal; this realization can be attained even by those whom society scorns. Therefore, having been born in this transient and forlorn world, give all your love to me. Fill your mind with me; love me; serve me; worship me always. Seeking me in your heart, you will at last be united with me.” (Bhagavad Gita)

Arjuna represents the perfect disciple through his unwavering faith and devotion to Krishna. Yet, Krishna still cautions this great warrior about the pitfalls on the path to self-realization.  In order to break free from the hellish grip of ego, one must first learn how to still their mind through meditation and cultivate an attitude of detachment from the fruits of one’s actions.

On his first point, Krishna is crystal clear as to why all sincere spiritual aspirants should try to practice meditation…to achieve inner truth and peace:

“The Supreme Reality stands revealed in the consciousness of those who have conquered themselves. Those who aspire to the state of Yoga should seek the Self in inner solitude through meditation. With body and mind controlled they should constantly practice one-pointedness, free from expectations and attachment to material possessions. When meditation is mastered, the mind is unwavering like the flame of a lamp in a windless place. In the still mind, in the depths of meditation, the Self reveals itself. Beholding the Self by means of the Self, an aspirant knows the joy and peace of complete fulfillment.” (Bhagavad Gita)

On Krishna’s second point, he explains to Arjuna that devoting one’s life to the path of selfless service (Karma yoga) is both the highest calling of mankind and the surest path to self-realization.  In order to selflessly serve and fulfill one’s “dharma” or divine plan, all serious men and women on the spiritual path must first renounce the fruits of their actions. In other words, all beings must learn to act without expectation of worldly rewards or acknowledgments:

“Every selfless act, Arjuna, is born from Brahman, the eternal, infinite Godhead. Brahman is present in every act of service. All life turns on this law. Those who violate it, indulging the senses for their own pleasure and ignoring the needs of others, have wasted their life. You have the right to work, but never to the fruits of work. The ignorant work for their own profit, Arjuna, the wise work for the welfare of the world, without thought for themselves. Perform all work carefully, guided by compassion.” (Bhagavad Gita)

As a culture we cling to all the external pleasures of the world that Krishna warned Arjuna about. The game of today…is wealth, power and fame. We play it to enhance our image and name. Sadly, our culture’s obsession with pursuing selfish materialistic desires just winds up creating more suffering for the world.  When you remove a sense of the sacred from life and assign it a commercial value what deeper elements remain? If the world’s rain forests disappear and endangered species go extinct, who cares? So long as western logging and mining corporations maximize profits and more wealthy businessmen grow richer. Likewise, who cares if one million civilians die from another senseless war? So long as the pockets of national leaders and oil investors’ grow fatter the horrors of war are justified. Finally, who cares if thousands of young men and women die on the streets from opioid overdoses? So long as there is money to be made off others’ addictions, we will continue to look the other way.

Fortunately, for us all, Krishna cares! Deep down, I believe we all do too! Like all great saints from every spiritual tradition, Krishna’s message is one of peace and personal transcendence. In the Bhagavad Gita, Krishna hands us the very spiritual weapons we will need to successfully wage war on our egos. In the end, is it really too much to ask for everyone to practice mindfulness and act selflessly? All of us are far more capable of evolving in the spirit of oneness than we give ourselves credit for!

Forrest Rivers is a lover of the Earth and author of the book: The Hippie Revival and Collected Writings(https://www.amazon.com/Hippie-Revival-Collected-Writings/dp/1515396959). He lives in the beautiful Rocky Mountains of Colorado. Feel free to reach out to Forrest through email: forrestrivers4@gmail.com or leave a message on his website: forrestrivers.com